Anna Min and Tina Cho are the dynamic duo that is behind Min Enterprises Photography LLC, a Minneapolis-based event photography company.

They say that as a business owned and run by two queer women of color, they have strong ties to our communities and the people in them. “We also know the reality of the economics of marginalized communities; we can’t always afford the means to tell our truths in mainstream media.”

“This is why we work so hard to show up, so we provide high-quality photojournalism coverage of community events. We share the story from the community’s perspective; a story of strength, reclaiming cultural identity, sorrow, joy, and dignity.”

“We share with you images from three different events in the Twin Cities: #BlackLivesMatter-Million Artists Movement March, #BlackXMas at Mall of America, and #ReclaimMLK March to the Capitol. We chose these images because each of them shares a moment that you wouldn’t have seen through mainstream media outlets.”

Many adoptees face problems in their high school years. Puberty is often the time they start asking questions about their origins and consequently, many of them, later on, need to get their GEDs. I was recently asked for a recommendation for a GED course, so I went on a shopping spree. I learned about several GED programs but so far, the best is Onsego GED prep.

It’s effective, it’s designed with simplicity, and it’s for adults (not some stupid cartoon). Here are the details. 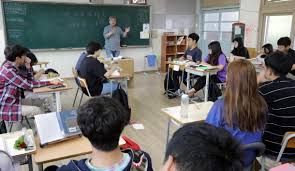 Let’s start with general information about the GED® test. After passing the GED test (actually four independent tests), you receive a credential that takes the place of a high school diploma. It is the equivalent of earning your high school diploma.

You can take the GED online or at a state-certified test center, and you may very well take an online course to help you pass the GED. Taking a good GED preparation course can help you pass the test in one try. This will save you a tremendous amount of time, money, and stress.

We are pleased to announce that soon Gazillion Voices will be partnering with radio station KFAI to produce all future GV podcasts. As a test run, Kevin Haebeom Vollmers recorded his conversation with Dr. Richard Lee of the University of Minnesota at the KFAI studios.

Richard M. Lee, Ph.D., LP is a Professor of Psychology and Asian American Studies at the University of Minnesota.

He is the past president of the Asian American Psychological Association and Incoming Editor for the peer-reviewed journal Cultural Diversity and Ethnic Minority Psychology.

His research examines the role and relevance of racial, ethnic, and migration experiences among Asian American individuals and families.

Current projects include a seven-year follow-up study on the cultural life experiences of international adoptive families regarding reclaiming their culture with adolescent-aged Korean children and implementing a parent education program with Hmong American families.

What if I am not missing a person, place, or thing? Rather, I am denied the words that are shaping my life. The absence of these words is no less heartbreaking than the loss of my first family, culture, and language.

However, these words can interrupt, resist, and heal the undeniable sickness of adoption trauma. Therefore, in an effort to stop missing that which cannot be replaced, I am calling out ADOPTEEPHOBIA.

ADOPTEEPHOBIA [uh-dop-tee-foh-bee-uh] (n.) The irrational fear and hatred of adoptees.

The agenda of ‘forgiveness’ didn’t appear in Fang Lee’s adoption experience until she was 27 years old. Listen to this second part of her story. “The scenario isn’t that I am contemplating should I or should I not forgive my birth parents who sent me away for the sake of their vested interest in having a boy to carry on their family blood.”

See also this NBC video in which the Korean adoptee and rapper Dan Matthews gets back to Korea a few years after he met his biological family, and brings the two mothers together for the first time…

Back to Fang Lee: “To talk about this topic, I need to expose a painful experience. It is the single most significant event that occurred in my entire adoption history.

That event marked the fallout between me and the biological siblings, forever. After that, one more secret was buried within the biological family (they have other skeletons in the cupboard, so to speak), one that was never revealed to my birth parents until 13 years later.

Forgive or not forgive? – The wrong question!Read More »

In the United States, we live in a society that often lacks love and acceptance. From the day we’re born, we’re told how we should live our lives.

We’re surrounded by everyday messages through media, like advertisements, television shows, and literature, that explain to us how we should raise our children, how we should look, and how we should act in certain situations.

Interesting is also this UW Tacoma video in which JaeRan Kim talks about adoptees as parents and Korean American adoptees are talking about Race, Ethnicity, Reclaiming Culture, and Adoption.

Our culture pressures us to embody a certain “norm,” and consequently, we frequently hold ourselves—whether consciously or not—to impossible standards. To this end, when we strive to reach these standards, we automatically set ourselves up for failure.

It might be especially difficult for people who hold marginalized identities, or people who are often socially excluded for not personifying cultural norms, to exist and survive under these conditions.

Let’s listen to Erica Gehringer’s story. “When I was growing up, I tried my very best to assimilate to the norm. At four months old, I was transracially adopted by two white parents and an older adopted Korean brother into a 96% white, suburban, Midwestern town.”

Adoption has a life-long impact on the child, positively or negatively. I have heard some adoptees who have loving adoptive parents supporting their search for birth parents and respecting their cultural origins. Others, like me, struggle to overcome the sense of incompleteness and different feelings and beliefs about who we are. But there is a path to heal the broken heart.

We don’t walk around with a broken arm or leg so we don’t appear to be disabled in some way. Likewise, no one can see the broken heart of a baby that was given up for adoption.

Does anybody think a baby would voluntarily leave their mother? “Well, how would the baby know anything?” I heard adults say to themselves as if they needed to be convinced that what they did was not going to impose the slightest thing on another human being.

What a baby can sense and know is already widely discussed. In this link mentioned, you will see perspectives from the birth mothers, adoptive parents, and adoptees. It is like all parties involved in the adoption come to this platform to vomit their pain.

The Path to Heal the Broken HeartRead More »

Today, I would like you to read Fang Lee’s story where she’s taking a look at the other side of things. “A few days ago, as I stepped into an air-conditioned Target to purchase some toothpaste, I was abruptly reminded that summer was coming to a close and fall was rolling around the corner. I felt my heart drop to the pit of my stomach, and I caught myself gasping for air. What is always synonymous with the beginning of fall? School, of course!

At my local Target store, I noticed the dollar shelves being lined with back-to-school junk and all of the bathing suits had red labels screaming, Buy me! Summer is ending!” As my summer vacation period comes to a close, all of my friends that will now go to college start to post on Facebook about how wonderful (or not) their summer has been and just how excited they are about school starting up again or how wonderful they think life on a college campus is going to be.

Most of my friends completed their regular high school education but I managed to meet all of California’s GED requirements and earned my GED diploma fast and with flying colors! I didn’t need to take any college admission tests like the SAT as my GED scores were top-notch. I’m “College-Ready”, they say!

The Other Side of ThingsRead More »

When Nancy Newton Verrier, an adoptive parent, suggests that adoptee lesbian relationships are motivated by the traumatic loss of their mothers in her discussion on “The Incest Taboo,” she does this within the context of homophobia and heterosexism to adoptees – a context where gay, lesbian, bisexual, transgender, and queer people are marginalized as sick, wrong, perverted, and dangerous.

LGBTQ adoptees may experience homophobia as threats to their physical safety, in addition to employment, housing, and healthcare discrimination due to sexual orientation and perceived gender identity.

Homophobia is a dangerous power dynamic of heterosexism – the values, beliefs, and behaviors that position heterosexuality as the norm, and ensure the subordination of married and unmarried women, lesbian, gay, bisexual, queer, and transgender people whose gender assignment at birth or adoption is not the same as their gender identity.

Within homophobia and heterosexism, the biological parent and child relationship is the only socially acceptable example of same-gender love that is not shameful if elevated above married partnership.

Homophobia and Heterosexism to AdopteesRead More »

Until the age of 29, I had never met anybody who looked like me. That is, until I met my birth mother. This is the memory I’d take with me to Mars, if I ever go there. This post is about my reflection on Mother’s Day.

In June, I attended the Allied Media Conference in Detroit for the first time. Described as a “collaborative laboratory of media-based organizing strategies for transforming our world,” it is an annual gathering of healers and rabble-rousers of all kinds that pay particular attention to centering the stories, experiences, and leadership of women, people with disabilities, queer and trans* folks, people of color, lower-income people, immigrants, and other historically marginalized and silenced communities.

To set the stage at one workshop, the facilitators told us that due to the post-industrial destruction of Earth, we would be evacuating to Mars. The only catch was that we would each lose all of our memories but would be able to listen to the three-minute story of just one, which we would be learning to craft, tell, and record as part of our session together.

For people who know me, it comes as no surprise that Mother’s Day is an emotionally challenging holiday for me. As a daughter, I carry with me the complex sadness of being estranged from my parents for reasons that are partially due to identity and conflict and partially due to my own survival and self-preservation.

My Reflection on Mother’s DayRead More »