Both of these are worthy topics and there’s much to say about each. I hope my readers have a good understanding of English Grammar. The subject is serious enough to pay attention to detail. It has to do with reclaiming culture so I decided ultimately to go back to the overarching theme for these columns—research.

In a previous post, I wrote about doing insider research in my role as an adult international adoptee who does research on adoptees. I’d like to report on some of the scholarships that I have produced within this capacity.

In October of 2012, I, along with a graduate student of mine, Lisa Treweeke, and a colleague and friend of mine, Dr. Muninder Ahluwalia, published a paper titled, “Reclaiming culture: Reculturation of transracial and international adoptees” in the Journal of Counseling and Development.

The concept of reculturation refers to the process by which transracial and international adoptees (to whom I’ll refer as TRIAs to simplify this narrative) reclaim their birth cultures, which were lost or never attained due to their placement in transracial adoptive homes.

This construct of reculturation was developed based on a series of observations and analyses that were made possible by my personal identities. My multiple lived identities as an adult Hong Kong adoptee, a practicing licensed psychologist, and an educator and researcher gave me personal experiences to draw upon, as well as the privilege to have multiple windows into the lives and stories of adoptees.

This unique position allowed me to critique and understand adoption from several distinct perspectives, and it has helped me to develop and tailor current psychological theory to the experiences of adoptees.

I learned from fellow adoptees that I met as friends, as colleagues, as clients in practice, and as those who were subjects of narratives, books, and films. Their stories and experiences along with my own enabled us to look at some of the basic premises that exist about TRIAs. 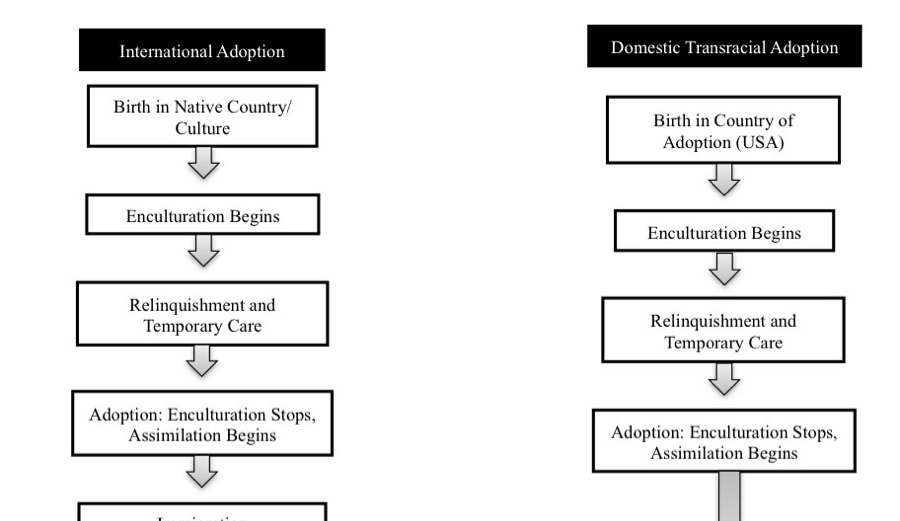 The most basic premise that exists, but that we believe is false, is that adoptees should and could “maintain their culture” (in reference to birth culture) after they are adopted. Too often, others (friends, acquaintances, even professionals) would ask about the adopted person’s culture and how that would be supported and developed.

In many cases, families would respond by saying they had their children in language classes, culture camps, or adoptee groups from the adoptees’ countries of origin. However, we questioned this idea that adoptees raised by White adoptive parents would truly be able to hold onto a culture that was not really lived within their adoptive families.

By definition, culture refers to the beliefs, practices, language, values, and traditions of a group of people with a common history. Usually, culture is tied to an ethnic group. In the case of the adoptees, we knew the vast majority were adopted by White parents.

Thus, a Korean adoptee, for example, would be expected to be adopted as an infant or toddler (as is predominantly the case), yet be able to obtain and then maintain his/her Korean culture despite having been raised by White parents who do not practice or hold Korean culture.

We concluded that upon adoption by White parents, TRIAs quickly begin to assimilate to their adoptive parents’ White cultural experience and lose their birth culture. To support this assertion, we had knowledge of multiple adoptees who were adopted at older ages (8 or 9) when they were already clearly fluent in their birth languages, but they lost their language upon their adoption even when they were adopted with siblings who were also fluent in their birth language.

Their assimilation to the adoptive culture became a matter of survival for these adoptees so that even maintaining the language that they spoke for their entire lives prior to adoption was impossible.

Despite losing birth culture upon adoption, TRIAs also tend to face significant pressure, both externally and internally, to be proficient within their birth cultural traditions. This is particularly the case during adulthood when acquaintances and strangers respond to their visible ethnic group membership and expect TRIAs to have knowledge and expertise in their ethnic group’s culture. These expectations can lead to the desire to reclaim TRIAs’ lost birth culture.

In addition to our questions about the premise about maintenance of culture, we consulted psychological theory to understand the process by which culture can be learned and how individuals may come to develop new or additional lived cultural experiences.

Acculturation refers to the internal process that occurs when immigrants come into direct contact with members from a host culture (in the new country in which they reside) (Padilla & Perez, 2003). In traditional acculturation, the host culture is pervasive and dominant, so taking on the cultural traits of the host culture is based on more of an immersion experience.

However, in the case of TRIAs, they are raised in families from the dominant culture and their efforts to obtain or maintain birth culture will be qualitatively different since their birth cultures are minority cultures within the U.S. Given that we believe that many, if not most, TRIAs are motivated to in some way or to some degree reclaim their lost birth culture.

Essentially, TRIAs must seek to acculturate to a minority culture when they seek to reclaim their lost birth cultures, yet there is no psychological construct that accounts for this process.

To begin to address the ways in which TRIAs attempt to reclaim their lost birth culture, we developed the model of reculturation. This process accounts for the facets of adoption that occur both internationally and domestically. The process depicted in the previously mentioned published paper is described below.

Upon relinquishment (whether voluntary or involuntary), children often enter some form of temporary care in an orphanage or foster care. Given that caregivers are typically from the same culture, enculturation continues in the birth culture.

Rapid assimilation occurs given that most adoptees enter families and communities with few, if any, connections to their birth cultures. To survive and adjust to adoption, adoptees assimilate and endorse the White culture of their adoptive parents.

The disconnection from the birth country and birth culture must occur to enable assimilation and survival. Furthermore, many adoptees work to fit into the dominant culture of their families and use the White cultural group as a reference group in their individual development.

Although assimilation continues, TRIAs may also have exposure to birth culture throughout their development. This exposure can be of their own volition or their parents’. Three main approaches to gaining birth culture exposure are typically utilized: